[Video] One Easy Tip for a Successful Sales Conversation

You've probably heard that being a good listener is the key to being successful in sales. While I agree that it's essential, I'm here to tell you that your ability to ask good sales questions is even more important. [Video] Why You Must Frame Your Sales Conversations With Assumptions

From the first day I started selling, I was told that I should never, ever assume – that it would only lead to failure. Instead, I was supposed to be consultative, learning about a prospect's situation before I made any definitive recommendations or pronouncements.

Well, today things are different. To be effective in today's business environment, you need to assume. Why? Because it makes you sound like you know what's going on. Let me show you what I mean.

If you're tired of calling on people who really want to work with you, but can't seem to get anything approved, listen up! Spending one more day working with these really nice individuals is a total waste of your time - even though they love you and what you're selling. You'll never close deals that way.

If you want to get the business, you need to find those individuals in the company who are making things happen. CEB, a sales research group, calls these people the Mobilizers. They're the ones who spearhead new projects in their organization. They can see into the future and know that change is imperative for the company - and for them personally. Are You an Unintentional Sales Wuss?

I’m sure your answer is a resounding “no.” But in reality, it’s not what you think that counts. Only your prospect’s perceptions matter—and they can be very different from what you’d imagine.

Why? Because they’re extremely busy. Every time they talk with you, read your emails or meet with you, they’re asking, questions like:

So let’s take a look at one scenario to see how your best intentions might be totally misinterpreted. 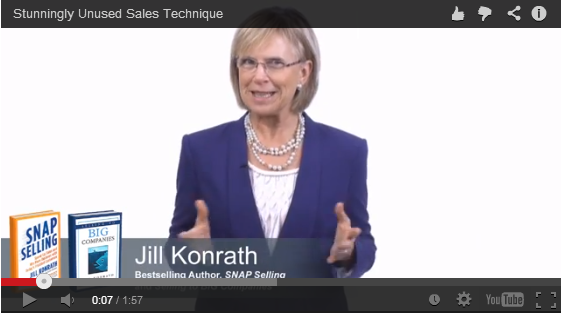 Asking good sales questions is pivotal to your sales success. But, that's not what I'm here to talk about today. Instead, we're going to focus on what happens AFTER you ask these questions.

And, it's no secret that you need to be a good listener. To most people, that's a big duh!

But here's the deal. After asking a sales question, if the prospect hasn't responded in 2-3 seconds, the average seller jumps in to fill the silence.

Katie was excited. She'd just received a promotion. And, for the very first time ever, she was asked to do a presentation to a client who was in for an all day meeting on Monday.

She'd be doing her part right up front. 10 minutes. That's all she had on the schedule. But she wanted to make a good impression - on both her colleagues and the client.

What if you were at risk of losing your best customer?

It’s time to get your thinking cap out again. I’m here to stretch you out of your comfort zone so you can see things in new ways. Today we’re going to look at your very best customer – the one you love working with and who contributes a fair share to your income. Got it?

Good, because now I want you to put yourself in your competitor’s shoes. You want this account really badly. And you know whose currently got the business.

So as you sit now, in your competitor’s shoes, here’s some questions I want you to think about:

[Video] The Two Words That Matter Most in Sales

I was reading a non-sales related blog post the other day when suddenly I came to a screeching halt. Two words jumped out at me. And, I immediately thought – these words capture exactly what it takes to be successful in sales today.

I want you to think about all those prospects you’re planning to close this month. Pretty confident that you’ll get their business?

Well, I’ve got news for you. Research shows that 60% of the people you’re expecting to close – won’t. And they’re not going to your competitors either. They’re sitting there, mulling it over and asking themselves …. Does it really make sense to change?