It was my last day at the Sundance Film Festival. After waiting for way too long, Shari Levitin and I finally entered the virtual reality experience that people were raving about.

In the midst of a dark room was an empty “stage” about 20x30 feet surrounded by production equipment, we (along with several others) were hooked up to a variety of devices. 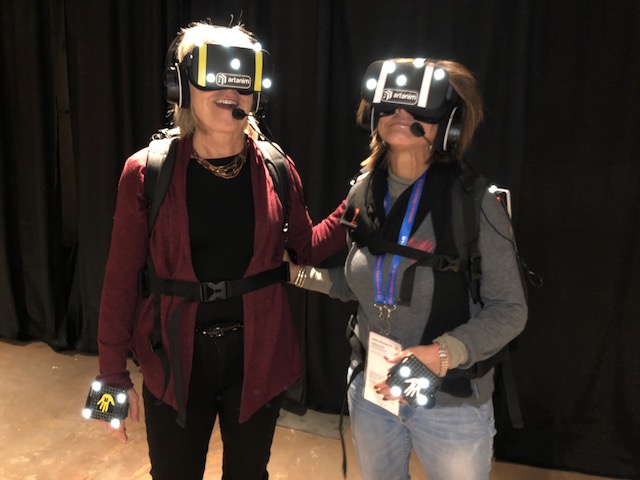 We had sensors on our hands and feet. A backpack carrying god-knows-what. And finally, goggles (the last item we put on) that immediately transported us into a new realm—a cave. I looked around warily, not sure what was going to happen.

Beside me, Shari had transformed into a shy little farm boy wearing bib overalls and Converse tennis shoes. The tall guy turned into a 7 foot Chinese woman with short hair. The other woman looked like Olivia Newton John in Grease. I had no idea who I was, but my arms looked dark and I appeared to be wearing a skirt or shorts.

Suddenly the top of the cave was removed. As I looked up, I saw giant people with beautifully painted bodies that reminded me of patterned lycra leggings. They were busy working outside, carrying large boulders in a place that looked like Northern Arizona.

When I turned to my left, a gigantic woman was kneeling down, staring at us like we were specimens in a petri dish. Others came to look too. We stared at them as they observed us. We talked amongst ourselves too, fascinated by this new world and what we were seeing.

Then the scene shifted as the giant people built a house around us; we were suddenly overlooking their city. People were in other rooms; we watched them. They were dancing, talking.

Our surroundings morphed again and we were in a beautiful park. People were dancing, doing yoga and other slow, deliberate exercises. It felt like an invitation to join in; some of us did, with trepidation. It was a bit scary; we weren’t sure what would happen next. Occasionally, we even received snippets of communication from these people.

After 18-minutes, a giant man approached us holding a beautiful purple geode in his hand. He knelt down and slowly covered us with the stone. We were back in our cave again and our time was up.

During this whole experience, all I could think about was: Who are these people? What’s their life like? What matters to them? What do they think of us? What can I learn by observing them?

It was a surreal experience … which of course got me thinking about sales. (Sorry, my brain always defaults to that setting!)

In sales, we enter our customers’ world all the time—and, the more we know about them, the more effective we can be.

Duh! Everyone agrees with that.

But here’s the deal: Surprisingly few sellers learn more than the basics about their prospects. Even fewer take the actions needed to truly understand what’s going on in their organizations. I mean truly understand.

Think you’re one of the good guys?

Then I dare you to take this Virtual Reality Challenge.

1. Think of one of your current prospects—a company.

Here’s the hard part. You’re going to spend the next 8-10 minutes talking AS IF you were this person. And, you’re going to pretend that you’re addressing a salesperson like yourself. (Note: This works even better if you’re doing it in a small group.)

Start by saying this:

“My name is (prospect’s name) and I’m the (position) at (company). I understand you’re trying to sell me your product/service. Here are some critical things you need to know about me first.”

How’d you do pretending to be someone else? One of your prospects, talking to YOU.

Perhaps you uncovered some gaps in your knowledge. If so, I hope you take the time to close them because it’s vital for your success.

Your customers are very real. If you fail to communicate with them about what matters most, your experience with them—like mine with the beautiful giants—ends all too abruptly. And you may never get another opportunity again.

That’s what I think. Let’s get real!