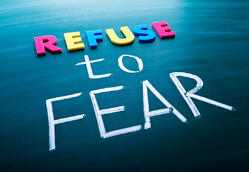 Like many sellers, I look calm, cool and collected. But underneath that exterior, I've often felt far differently. If you really knew me, you’d know that I’ve worried about many things, including:

I’ve fainted in sales calls. Once I even dropped 10 pounds in the month following a promotion to major account sales. I was so sick to my stomach that I couldn’t eat. (Not a good diet!)

During the 2000 downturn, I lost 95% of my business. It took me a couple of years to get my mojo back. I was afraid that I was totally washed up and had nothing left to offer the sales profession. (That’s probably hard for you to believe, but it’s true.)

At our core, we all worry about failing.

But what really matters is how we handle it.

Agile sellers see failure differently from everyone else.

When a competitor wins a deal, agile sellers refuse to see themselves as a loser. When they fall into slumps, they don’t take it as an indication of their competence.

To an agile seller, failure is a natural part of the learning process. They expect to make mistakes and assume they’ll screw up.

That doesn’t mean they like failing any more than other people. But they know that when they’re learning something new, it’s going to happen.

Personally, I’ve chosen to follow their example. Please note the word chosen. It is a decision that needs to be made. Over and over again.

The key is to reframe failures.

Turn sales failures into valuable learning experiences. When you do that, everything changes. You stop being so hard on yourself. You quit trying to do things perfectly.

And you’re a whole lot less stressed – which is good, because now your brain is able to think more clearly and creatively.

If you’re struggling with something right now, you’re not failing. You just haven’t learned it yet - even if you’ve been in sales for your entire career. Things change. You have to as well.

Failure is your route to success. Remember - if you don’t learn from your mistakes, you’re bound to repeat them again and again.

(Note: Reframing Failure is just one of the four mind-sets of agile sellers. To learn more, download  a preview of Agile Sellingnow.)